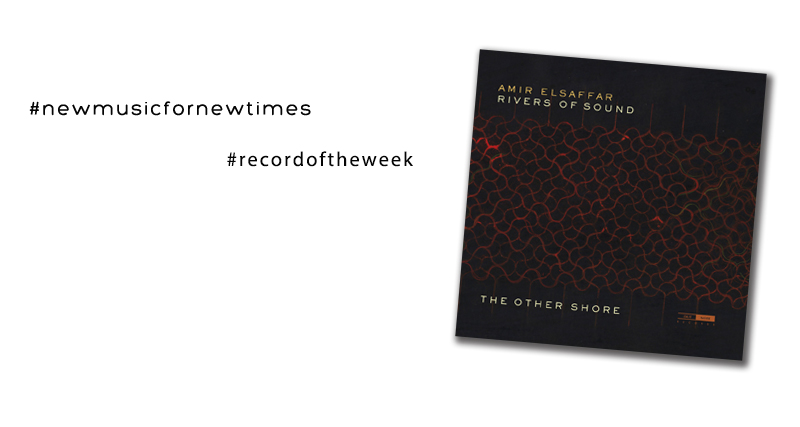 All music was composed in October, 2019 during a residency at Baryshnikov Arts Center. This CD was published with the support of the Arab Fund for Arts and Culture (AFAC) and the Shifting Foundation.

Amir ElSaffar – who leads five ensembles and has released seven albums over the past 16 years – has earned acclaim for being, in the words of All About Jazz, “a virtuoso on the horn, but also an imaginative bandleader, expanding the vocabulary of the trumpet and, at the same time, the modern jazz ensemble.” The Wire has described ElSaffar as “uniquely poised to reconcile jazz and Arabic music… with eloquence.” The Chicago Tribune hailed the way his “melismatic trumpet lines convey tremendous lyric beauty,” adding that his transcultural innovations place him “among the most promising figures in jazz today.” ElSaffar – a 43-year-old Chicago native of Iraqi-American heritage – now presents The Other Shore, his eighth album and the second by his 17-piece Rivers of Sound orchestra. This moving, sonically kaleidoscopic album features an all-star lineup of players on instruments from East and West, with the performers improvising on the leader’s piquant, serpentine compositions: from the evocative curtain-raiser “Dhuha” (Dawn) to the ravishing “Medmi” (Epilogue). Belgium’s Outnote Records/Outhere Music releases The Other Shore, digitally and on CD, on September 10, 2021.

In the liner notes to The Other Shore, ElSaffar explains the concept for his large ensemble: “I formed the Rivers of Sound orchestra in 2015 as a musical, cultural and social experiment. The idea was to discover new ways of organizing sound without the hierarchical notions found in Western European art music (composer > conductor > players) and without the burden of precedence found in non-Western folk or traditional forms (relying on the past), but still maintaining a sense of structure and cohesion. I was interested in blurring spaces between improvisation and composition, between composer and players. The process relies on spontaneous group interaction, where each musician has agency as part of the creative process… Rivers of Sound is one of the most joyful musical experiences I have ever been a part of.”

Along with his fluid trumpet playing, ElSaffar sings vocalese in the Arabic maqam idiom and plays the santur, the Iraqi hammered dulcimer (including a beautiful extended solo in “Concentric”). The other members of Rivers of Sound are “family and friends who are like family.” These include his sister, Dena ElSaffar, on violin, viola and joza (the Iraqi spike-fiddle), and her husband, Tim Moore, on Arabic percussion. JD Parran, who plays bass saxophone and clarinet, performed alongside ElSaffar in Cecil Taylor’s large ensemble. Mohamed Saleh, who plays oboe and English horn, worked with him in Daniel Barenboim’s East-West Divan Orchestra. ElSaffar played in high school and college with vibraphonist Jason Adasiewicz, and alto saxophonist Fabrizio Cassol took ElSaffar on his first tour of Europe. Then there are the top jazz improvisers whom ElSaffar met through “serendipitous connections” on the New York scene: guitarist Miles Okazaki, drummer Nasheet Waits, saxophonist Ole Mathisen, pianist John Escreet, bassist Carlo DeRosa. The ensemble also includes Naseem Alatrash on cello, Rajna Swaminathan on the Indian mridangam, George Ziadeh and Zafer Tawil on the Arabic oud, and Tareq Abboushi on buzuq.

“I’m less interested in the surface intermingling of cultures and more fascinated by the new sonic possibilities in this unique combination of instruments from around the world,” ElSaffar says. “What happens when you combine the vibraphone, the santur and the English horn? The rich overtones mix to create fresh textures and sonorities, a new sound whether it’s scintillating or deep and resonant. But it’s not just the instruments but also the way these particular musicians play those instruments. What makes all the musicians in Rivers of Sound special is their versatility and openness to listening to each other, not being bound to any one style but rather bending with the music. We made our first album, Not Two, amazingly quickly, but after that experience and tours of the Middle East, Europe and the U.S., Rivers of Sound has evolved. Our chemistry has deepened, something you can hear in the fluent polyphony and play of microtonal harmonies on the new album, which I think is more ambitious than the first. The eight pieces are partially scored and partially improvised – so I rely on the players to help shape the music in the moment, bringing their own sounds and sensibilities to the compositions. They are what truly makes the alchemy of this music.”

In the liner notes, ElSaffar expands on both the technical and philosophical basis for Rivers of Sound: “The tonal basis of The Other Shore is the maqam – a system of microtonal heptatonic modes found in the Middle East, North Africa, Eastern and Southern Europe, and Central Asia. By using microtonal intervals, as opposed to the fixed pitches of the 12-tone equal temperament, the rigidness of forms melts away, allowing something new to emerge. The ensemble includes musicians from a broad spectrum of musical backgrounds and from different parts of the world. My desire is to expand beyond ideas of culture, in the sense of one style of music ‘belonging’ to a particular group of people or a society. Rivers of Sound proposes an alternative musical model by embracing a multitude of musical expressions, by focusing on the interactions between individual musicians. When we begin with an inherent sense of unity and interconnectedness, and think of musicians as individuals, not as representatives of a culture, there is no longer a need to ‘build bridges’.”