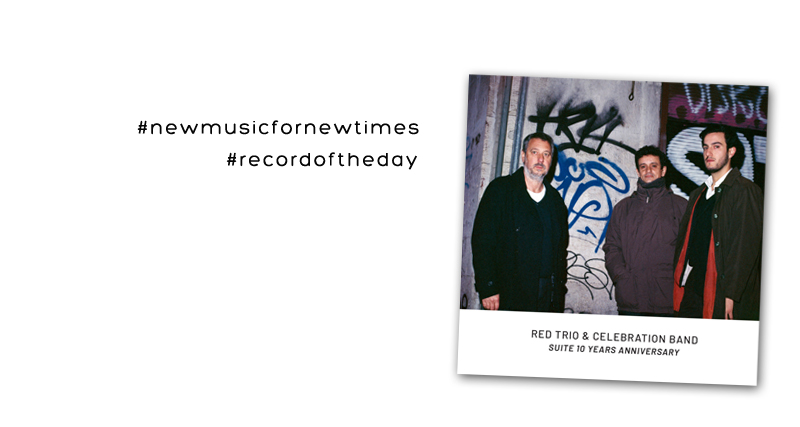 FreeJazzBlog quoted below, check the whole review by Stef Gijssels:

….we get this memorable album with the “celebration band”, an ad hoc group of musicians, primarily also from Portugal but with the addition of some partners on the previous albums such as John Butcher and Matthias Ståhl. The other members are Sei Miguel and Luís Vicente on trumpet, Fala Mariam on trombone, Pedro Sousa and Rodrigo Amado on tenor saxophone, Nuno Torres on alto saxophone, Ernesto Rodrigues on viola, Ricardo Jacinto and Miguel Mira on cello, Carlos Santos on electronics, Miguel Abreu on voice and electric bass, and David Maranha on percussion.

The performance was recorded to celebrate their tenth anniversary at the Teatro Maria Matos in February 2018. The theater itself commissioned the concert “Suite”, a work in three acts, each written by one of the three founding members, and deliberately composed for the ensemble mentioned above.

The first track, called “Corrente” is written by Rodrigo Pinheiro, as an half hour long magnificent piece for the ensemble, and it by itself can be considered a suite, with its varying subthemes and thematic shifts, ranging from slow fragile textures to intense and dense interaction, with all restraints dropping away near the end of the improvisation. The second track, “Mais Vale”, is written by Ferrandini, and is for me a disappointment. It is less complex in texture, more pychedelic in its delivery, and the vocals are a complete letdown. I understand that this is a very subjective appreciation, but it creates a totally different musical universe than what we are used from the band. ……………………………….read more